And so it was, that, while they were there, the days were accomplished that she should be delivered. And she brought forth her firstborn son, and wrapped him in swaddling clothes, and laid him in a manger; because there was no room for them in the inn. ~~~Luke 2:6-7

The Manger Scene (pictured above) has been a part of my Christmas experience for my entire life. It was given to my mother from her boss at that time (Rear Admiral Edward Hutchinson) shortly after the birth of my older sister in 1944. An important part of ‘Decking the Halls’ each year for my family was setting up the Manger Scene. My sister and I would carefully position each of the manger pieces in what we considered the proper spots. Of course, we continued to reposition them throughout the Christmas season – sometimes using them to re-enact the various parts of the Christmas story. The figures were much loved by the we two little girls. Needless to say – all this love took a toll on the pieces which my Dad with great patience and love glued and re-glued various parts of the pieces (the lambs’ legs especially!) throughout the years. My mother gave the Manager Scene to me several years after I moved to California because she knew how much it meant to me.

Each year as I set up the Manger Scene I remember the story of the birth of Jesus, reflecting on how much God loves us, sending us Jesus to spread the message of love. A special Christmas song always comes to mind as I arrange the pieces in the stable:

Love came down at Christmas, Love all lovely, Love divine;
Love was born at Christmas; star and angels gave the sign.
Worship we the Godhead, Love incarnate, Love divine;
Worship we our Jesus, but wherewith for sacred sign?
Love shall be our token, love be yours and love be mine;
Love to God and neighbors, love for plea and gift and sign.

It’s all about Love! Amen. 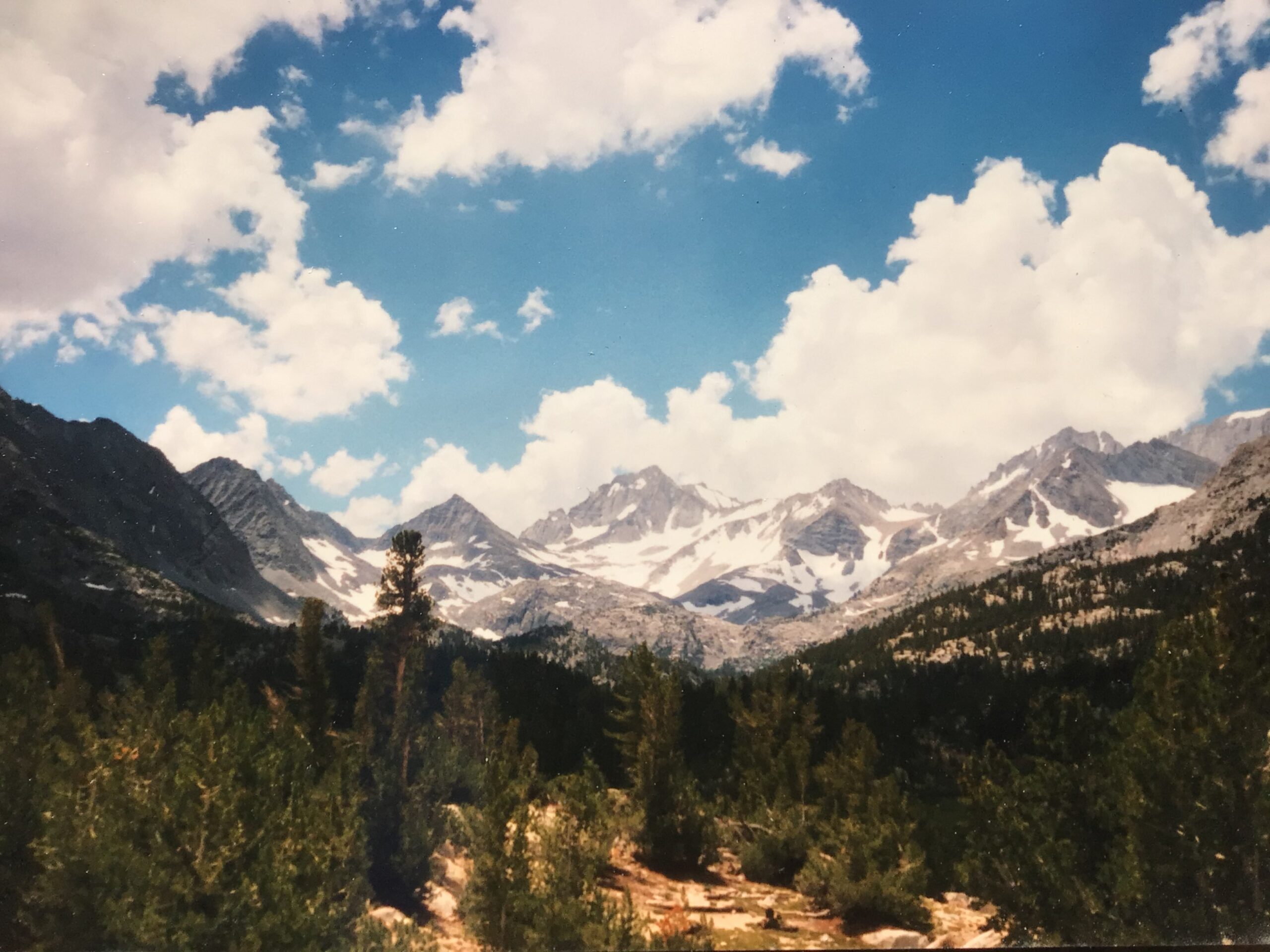 “See, I am sending my messenger ahead of you, who will prepare your way; the voice of one crying out in the wilderness:   ‘Prepare the way of the Lord, make his paths straight.’   John the baptizer appeared in the wilderness, proclaiming a baptism of repentance for the forgiveness of sins.   He proclaimed, “The one who is more powerful than I is coming after me; I am not worthy to stoop down and untie the thong of his sandals.   I have baptized you with water; but he will baptize you with the Holy Spirit.”~~~Mark 1: 2-4,7-8

John the Baptist has always intrigued me.  Here’s this guy, alone in the wilderness, living off the land and connected to God in ways we can only dream of.  I connected to him immediately because, as a young man, my only two passions were God and the wilderness.  I have always felt God’s calling strongest out in the mountains.

I remember one solo trip with my dog, Jazz.  We were in the Dinky Lakes Wilderness in the Sierra Nevada Mountains.  We were off trail, just wandering, focused on God and His creation. There was a stretch of time that God and Jazz and myself were One in Spirit, connected like never before.  I was on top the mountain.  As I came to look around me afterward, there were crystals everywhere, hundreds of them, laying on the earth around me.  Were they there before my “One in Spirit” time?  I don’t know.  I don’t connect crystals with spirituality necessarily, except for the fact that they are an exceptional part of God’s creation, reminding us of His beauty. I didn’t take a single crystal from that mountain, considering it a sacred place.

The three years before that time were hard years.  I had been laid bare and raw.  But I feel God used those years to help me “Prepare A Way” for Him to enter into my being in a way that I could never doubt or forget.

John tells us to “Prepare A Way” – that we need to make a way for the Lord in the world, but it has to start inside ourselves first. Preparing a way for God’s peace and joy and love in our own hearts helps us to understand what we have and need to share with others to begin a “preparing of the way” in them.   We are called to set ourselves “apart” from the world.  That comes just by allowing the Holy Spirit to live in our hearts.  Imagine being “apart” from the world as much as John was.  Would you eat grasshoppers and fight the bees and bears off for the honey?  But people “flocked” to him to be baptized and to hear him speak.  He even got to baptize Jesus. Wow! That’s got to be worth a few grasshoppers.    John, what a guy!

Prayer for the Advent Day:  Help me, O God, to be prepared for your light, and to share your gifts each and every moment.  Amen. 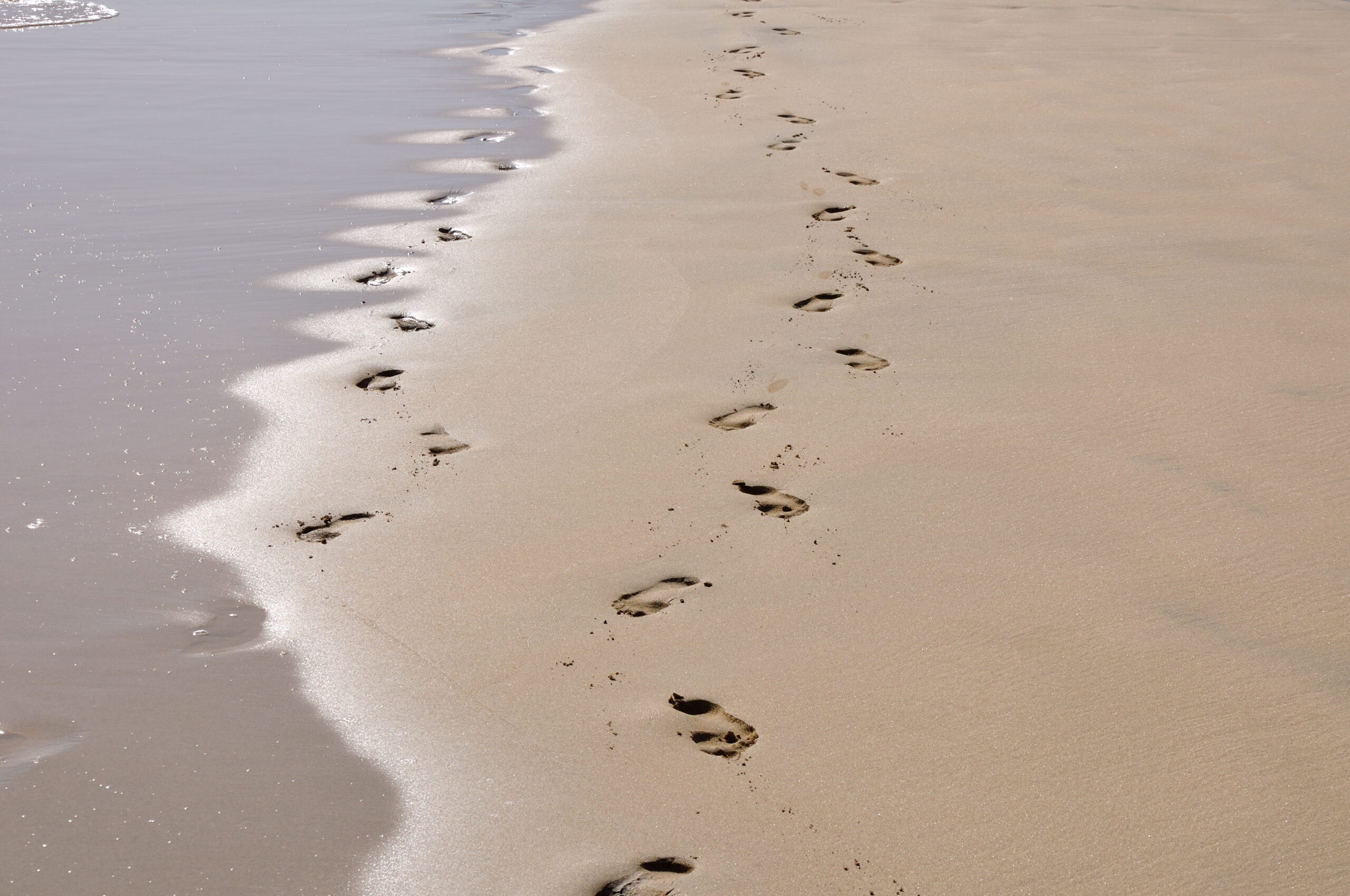 “Look, the virgin shall conceive and bear a son, and they shall name him Emmanuel,” which means, “God is with us.” ~~~Matthew 1:23 NRSV

God is with us.

Before we even knew God, God was there.

Throughout our past struggles and successes, God was there.

In our current stresses and anxieties, God is there.

As we deal with isolation and loneliness, God is there.

While we take steps forward from this place, God will be there.

Onward into life eternal in the presence of God, God will be there.

“Holy, holy, holy, the Lord God the Almighty, who was and is and is to come.”

God is with us.

Prayer for Advent (adapted from Joyce Rupp, O.S.M.): God of Loving Light, guide me into giving the gift of your light this season…and in the seasons to come!  Amen. 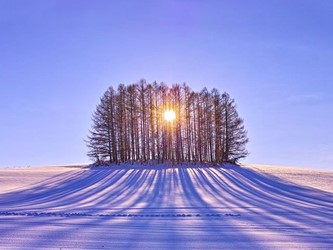 “Mary set out at that time and went as quickly as she could into the hill country to a town in Judah. She went into Zechariah’s house and greeted Elizabeth. Now it happened that as soon as Elizabeth heard Mary’s greeting, the child leapt in her womb and Elizabeth was filled with the Holy Spirit. She gave a loud cry and said, ‘Of all women you are the most blessed, and blessed is the fruit of your womb. Why should I be honoured with a visit from the mother of my Lord? Look, the moment your greeting reached my ears, the child in my womb leapt for joy. Yes, blessed is she who believed that the promise made her by the Lord would be fulfilled.” ~~~Luke 1:39-45

One of my favorite Christmas carols is the old English carol “In the Bleak Midwinter.” It is a poem by the English poet Christina Rossetti, commonly performed as a Christmas carol. The poem was published, under the title “A Christmas Carol”, in the January 1872 issue of Scribner’s Monthly. In 1906 Gustav Holst set it to music under the title “Cranham” and this remains a popular version today. However, an anthem setting by Harold Darke composed in 1909 is also widely performed by choirs, and in 2008 was named “the best Christmas carol” in a poll of some of the world’s leading choirmasters and choral experts.

I like both settings because I love the poem itself, which tells in a few short verses the whole of the Christmas story. The winter solstice is also one of my favorite times of year. While it is indeed the longest night of the year in the Northern Hemisphere, it marks the dawning of coming of Spring, and the promise of New Life. The days grow longer bit by bit. As a child I often could be found out flying a kite in the snow.

Perhaps because this has been such a dark year for most of us here in California, with the pandemic and the terrible fires this summer, I am very much looking forward to this particular annual passage through the darkness into the Light which this year falls on December 21st: also known as Midwinter.

It is also worth noting that in very early Christian tradition, March 25th is the day on which Mary received the news that she would bear a child. Nine months later is December 25th, thus giving us one reason why the year 336 is the first year in which Christmas is celebrated on that day (during the reign of Emperor Constantine, the first Christian Roman Emperor). It is with eager anticipation that we await the coming of the Light into the world “in the bleak midwinter.”

Prayer on the Solstice:  “What can I give him, poor as I am?  If I were a shepherd, I would bring a lamb; if I were a Wise Man, I would do my part; yet what I can I give him: give my heart.”

[A]s it is written in the book of the words of the prophet Isaiah, “The voice of one crying out in the wilderness: ‘Prepare the way of the Lord, make his paths straight. Every valley shall be filled, and every mountain and hill shall be made low, and the crooked shall be made straight, and the rough ways made smooth; and all flesh shall see the salvation of God.’” ~~~Luke 3:4-6

Inner Peace. How many people think getting ready for Christmas simply means buying gifts that you may or may not be able to afford, and then going crazy running around doing a bunch of activities? Or maybe it’s preparing for the holiday by telling bad Christmas jokes. Did you hear the one about the family who owned an English pointer and an Irish setter? The dogs get together at Christmas time and have point-setters. Ha!

I can tell you what we should be getting ready for around here. Believers like us are looking for a spiritual and wonderful something called inner peace, especially in this chaotic, scary year. We want to prepare the way of the Lord, that is, invite the mystery and wonder of Jesus’ birth into our lives. I believe all of us seek God’s peace. The only problem is, how do we find it?

Here’s one writer’s take on it. Advent was here, so the mom and her husband thought they’d see what their children remembered from their family devotions the year before. “Who can tell me what the four candles in the Advent wreath represent?” the mom asked. Her son jumped in with seven-year-old wisdom and exuberance. “There’s love, joy, peace, and . . . and . . .” “I know!” his six-year-old sister interrupted to finish her brother’s sentence: “Peace and quiet!”

We could use some peace and quiet this week—across our nation and the world! But perhaps peace should start right here—within each one of us. What would it take to dedicate ourselves to peace?

Prayer for Advent Love (based on Joyce Rupp, O.S.M.): I pray that I will let go of my desire to see too far beyond this season of love, so that my path of life may be filled with peace and quiet! Amen.